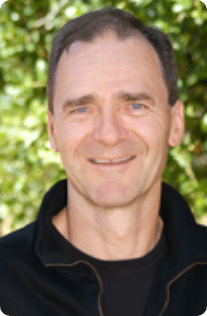 Peter grew up in Germany and moved to Canada after high school to work on a farm outside of Edmonton, Alberta. Drawn to sunny California, Peter attended the University of California, Berkeley and graduated with a BS in Engineering. He then obtained an MBA from Tuck Business School, Dartmouth College. Prior to joining Terradex, Peter was an Associate Partner at McKinsey in their Düsseldorf, Germany, and Washington DC offices. He also worked as the CEO of Esprit Europe. He returned to California to found eCargoService, where he developed and launched a web application for air cargo freight. Peter then joined Bob at Terradex mid-2000 as his partner.

Peter has been on the forefront of continuous innovation throughout his career and holds multiple U.S. patents, including: Method and Apparatus For Monitoring and Responding to Land Use Activities (Terradex), three patents in self-learning and self-personalizing knowledge search engines that deliver holistic results, two patents for self-contained payment systems that circulate digital vouchers, and a patent for a rule-based proximity, time-based tracking system.

Peter resides in sunny California with his wife Nancy and has three daughters, all who attended and graduated from Peter’s alma mater, UC Berkeley. Peter is an avid skier and world traveler (with continued strong ties to Europe) and spends time every day running, hiking, and exploring the beautiful Bay Area hills with his rescue dog, Haribo.